Conceptualization to Streaming: The 6 Stages of Video Production 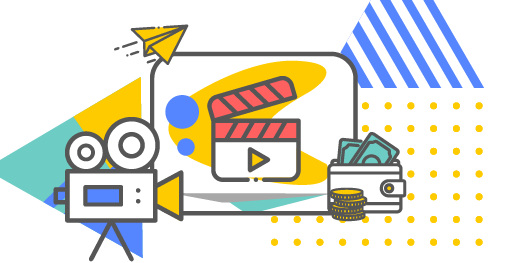 The creative and technical journey of creating a video has a jumping off point, a scenic route through your mapped out thoughts and—eventually—a beautiful destination.

Once you’ve made the decision to actualize your idea for an event, talk/tutorial or manuscript, you’ve officially begun the multi-stage process towards potentially going viral. As you proceed, you’ll soon realize that each stage comes with its own unanticipated issues and opportunities.

To effectively and efficiently overcome temporary obstacles and capitalize on promising concepts, a strong sense of resourcefulness will come in handy as you work through the following six stages:

Give yourself a round of applause, because you’ve done what many people spend years trying to accomplish: coming up with a winning idea.

Now, it’s beneficial to plan out how you envision your idea loo

king on camera. If you have the financial means, you can invest in software like Storyboarder, Plot or Frameforge to manipulate the format of your project.

If you’re on a tighter budget, all you need is a basic computer program or better yet, a good old-fashioned piece of paper and pencil—emphasis on pencil, since you’ll most likely want to erase frames that don’t quite illustrate your story.

On a side note, if your drawing skills leave something to be desired, don’t think twice about putting your thoughts in action since this is only a tool to guide your own vision and doesn’t have to be shared with anyone else. If you’re having trouble visualizing your concept, then you can always reach out to someone graphically inclined to collaborate.

Once your idea is formalized and you know the direction in which you’d like to take your story, the technical stage of pre-production comes into play. Before you can start filming your project, you need to gather essential tools that will assist you in sculpting a video masterpiece to which viewers will be attracted.

Production value goes a long way in the eyes of your prospective audience as it will encourage them to share it from their own social networks. Once again on the topic of budgetary constraints, you might not be in a position to buy or even rent high-tech green screen and audiovisual equipment (especially if you are just starting out). So, make do with what you have at your disposal and let your passion shine through—trust that viewers will notice.

Having said that, keeping track of whatever equipment you can afford—or maybe even borrow if you’re lucky—will relieve your mind of undue stress. Instead of trying to remember every piece of filming equipment and miscellaneous items like duct tape, extension cords, cord protectors, power bars and batteries, you'll avoid forgetting important devices during production.

Tip: On your checklist, write who’s responsible for bringing each item and a contact number/email if there’s a delay or something is missing. This promotes accountability amongst your production team.

On top of equipment, the setting of your future filming site will need to be decided upon. This entails traveling around to scout various locations that are appropriate for your project.

Keep in mind that the farther away, exclusive or luxurious your location is, the more expensive your project will end up being. Adding together transportation for your crew and equipment, with filming permits and on-location fees, your budget might dictate that you have to sacrifice your Hawaii beach scene for a sandbox at your local playground.

In addition to objects and places, you’ll have to decide who—if anybody—will be appearing on screen. Through detailed character descriptions and accurate casting, your on-camera talent will be the vessel for your story. As such, the person(s) should complement your message rather than distract viewers or send them conflicting signals.

Just imagine if Brad Pitt delivered a talk on advances in medical research; he might attract an audience, but his involvement would spark confusion or invalidate the credibility of your presentation.

Everything’s now in place, both creatively and physically, which means it’s time to start filming!

Once momentum builds and filming is underway, you can be certain that your to-do list will grow by the day and there won’t seem like enough hours in the day to keep up with your ambitious schedule. Just remember not to get discouraged because all directors and producers feel the time crunch of production.

Your primary goal during production is to get enough material to seamlessly tell your story without unnatural gaps. To accomplish this, you’ll probably need countless takes and B-roll (footage of landscapes, surroundings and background people that act as transition scenes within your primary plotline).

The more filming you can get done, the better—you’d be in a better position to have hours of extra footage to wade through in post-production rather than have to go back out and shoot missing or re-shoot imperfect scenes.

As we discussed, you’ll hopefully have more than enough footage to organize into a seamless storyline. It’s during post-production where the technical expertise of a digital video editor will be your most useful instrument.

A skilled editor will be able to cut and paste what seemed like a mismatched collage of material during production, into a piece of art your viewers will be able to follow and subsequently appreciate.

Tip: During post-production, you have the freedom to add value to your project by including a musical score, soundtrack and/or animation to supplement the art of storytelling. Viewers use visual stimulation to stay interested and a captivating song or tune usually evokes an emotive response from an audience.

Congratulations! You project is complete and all you have to do now is get your video on your target viewers' screens—there aren’t many other competing online videos nowadays, right?

In an ideal world, all you would have to do is post your video on your website, sit back and watch as viewers roll in. Unfortunately, the online video market is more saturated than ever and this form of media is growing exponentially every year.

Every day, millions upon millions of video are uploaded and marketed to a target audience who would enjoy your content. To differentiate your video from the overwhelming competition, you can use a multitude of channels to communicate the value of your project; the most popular namely being social media.

Choosing the right social media platform to reach an engaging audience takes trial and error at first as you tweak the timing and audiences of your paid or organic posts. However, once you find the posting sweet spot, you’ll effectively maximize your KPIs. Keeping an eye on analytics will be helpful when determining the appropriateness of the chosen channel and whether viewers are responding to your calls-to-action.

To supplement your website and social media presence, it makes a world of difference to have a video platform that can be customizable to your brand and has the capacity to upload, store and stream videos without interruption. As mentioned above, the competition is stiff out there, so you want to make sure that a crowded, generic platform doesn’t overshadow the visibility of your content.

As a final note—arguably the most important—you might be wondering how you’re going to be able to make a living off your video career (or at the very least pay off your last production and fund future ones). Selling ads to companies on your video website or directly on your videos affords you the opportunity to earn revenue through monetization.

In theory, your finished video will have progressed through these stages in this order. However, as we all have realized at one time or another, life happens. Don’t get discouraged if you have to backtrack to a previous stage to solve a problem preventing you from moving forward, just rest assured that revisiting mistakes isn’t accepting defeat.

Contrary to that “glass half empty” mentality, think about how much time and money multi-billion dollar movie studios spend on perfecting their works of art in the editing booth. If Universal, Paramount and Netflix regularly find it necessary to fix production issues from cinematic experts like Spielberg, Scorsese and Tarantino, it’s totally justifiable for you to have to put out the occasional fire or require the odd retouching.

Visit our website to learn more about the business of online video.

Kevin is the Content Specialist at Worldplay, where he develops informative content about online video management and digital marketing.

Vidflex™ is a product of Worldplay
Copyright 2020 Worldplay (Canada) Inc.
All rights reserved