In response to the suspension of competitions in Canada resulting from COVID social distancing guidelines, ScotDance Canada (Scottish Cultural Organization for Traditional Dance in Canada) enlisted the participation of their members to reach a fundraising goal of $30,000 to support the Kids Help Line and Food Banks Canada. With a history as a charitable organization and governing body overseeing and supporting Highland dancing events in Canada, ScotDance Canada enthusiastically encourages its dancers to share their love of dance while contributing to their community. In fact, this reciprocated enthusiasm is incentivized with two scholarships for dancers to further dance and education.

With the help of the Vidflex™ video platform, on which ScotDance Canada has been live streaming its annual Canadian championship event since 2018, the national community of Highland dancers banded together on August 15th, 2020, to compete in a uniquely benevolent format. Featured in popular or recognizable local landmarks across the country, dancers shared short video clips of themselves performing traditional Highland dances or newly choreographed sequences to gain awareness for their worthy cause. Impressively, a total of 300 videos were uploaded to the platform from four teams across the country to see which team could raise the most pledges.

Successful in their virtual fundraising efforts, ScotDance Canada raised an astonishing $50,000 for Food Banks Canada and the Kids Help Phone, with the British Columbia/Manitoba team ultimately collecting the most pledges. The instant success of the videos drew in a considerable number of viewers as 75% of the original goal was pledged within the first couple hours, with the remaining 25% collected within the same day. An additional $20,000 in pledges were collected throughout the week following, as the videos continued to be viewed and appreciated by fans and first-time viewers across the country. As an added bonus, the video platform had a built-in "Donate" button, allowing generous viewers to contribute to the cause, which streamlined the pledging process for a quick and efficient donation.

Cheryl Rafter, President of ScotDance Canada, former competitive Highland dancer and organizer of the event, noted that video was a great method of showcasing their art form, especially to those who hadn’t previously known about Highland dancing. She continued to express her appreciation to the provincial Board of Directors for promoting the event within their provinces and for all those who participated and pledged during the event, commenting on how helping these two charities has given her more satisfaction than any competitive event she has won in the past. 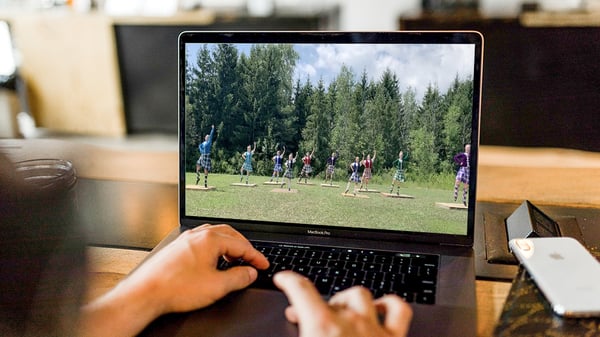 Fortunately, the overwhelming success of this fundraiser has instilled a powerful sense of optimism regarding video-powered community events, as there is a possibility of it becoming an annual event.

Suffice it to say, video has the proven potential to connect communities and contribute to the well-being of individuals by raising awareness for philanthropic endeavors. Acting as a cost-effective and efficient channel to coordinate fundraising efforts, video is able to transcend travel, mobility and in-person gathering restrictions to reach collective, altruistic goals.

Visit our website to learn more about how video can help your next fundraising or community event.

Kevin is the Content Specialist at Worldplay, where he develops informative content about online video management and digital marketing.

Vidflex™ is a product of Worldplay
Copyright 2020 Worldplay (Canada) Inc.
All rights reserved